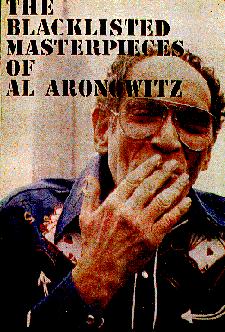 Blacklisted for all intents and purposes (for no good reason, I like to point out) and with my writings unfairly denied the light of print, I felt like a man sentenced to life imprisonment for a crime he did not commit.

I published THE BLACKLISTED MASTERPIECES OF AL ARONOWITZ on a Xerox and promptly bought a full-page ad in the Village Voice proclaiming, “SIX COPIES NOW IN PRINT!”  I had a printer run off a second edition and there are, as of the end of January 2001, 151 boxed, numbered and signed copies now in circulation.

The book doesn’t really contain what I would call “masterpieces.”  What the book contains are stories that no periodical saw fit to print at the time but stories, nevertheless, that I think you’ll find it fun to read.  Some of the stories have since made their way into print.  Four excerpts can be found on my website, in Column 14, in Column 15, in Column 22 and in Column 23.

With the book dedicated to the memory of John Lennon, No. 1, the first copy, went to his widow, Yoko Ono.  Others of the first 10 numbered copies went to George Harrison, Bob Dylan, Allen Ginsberg, Pete Hamill, Bill Wyman, Todd Rundgren, John Sebastian, Ahmet Ertegun and Bill Graham.  But a number of copies are still available as collector’s items.

"The Blacklisted Masterpieces of Al Aronowitz" is temporarily unavailable.

Perhaps you’d like to read what Michael Perkins had to say about the book in his review in Screw of March 1, 1982:

The Blacklisted Masterpieces of Al Aronowitz is as much an embarrassment as a treasure, because it is a cry from the heart of a journalist who fell from the top of his profession to the bottom­---where he remained for the past decade.

It's embarrassing because when you lose big in America you're not supposed to complain that you were robbed---and in this assemblage Aronowitz does complain:

[In]... reportage, memoirs, commentaries, newspaper clippings, letter, replies, memos, biography, affidavits, notes and other exhibits, all grouped under 22 titles, the author tells us how these masterpieces came to be blacklisted. The story is tragic. Despite his impressive credentials, the author was falsely defamed, wrongly accused, illegally tried, unjustly sentenced, cruelly blacklisted and mercilessly driven insane to end up on the welfare rolls.  But the book has a happy ending, which is: the book itself, presented as the author's case for recognition. . . . Clearly, the author is asking the public to be the judge.

In the opinion of this member of the public, the pieces Aronowitz has collected here are not "masterpieces"---nor are they, strictly speaking, blacklisted. (The author says that he has been blacklisted from steady employment as a journalist since his famous "Pop Scene" column was dropped by The New Yak Post in 1972, but this is different from having specific articles blacklisted by publications.)

If they are not blacklisted or masterpieces, what does this black box stuffed with a career contain?  If the journalistic hyperbole is put aside, what's left?  In the interests of fairness, we'll take the author's word---from a press release he has written---about the treasures in his magic box.

The fact that the author was the man who introduced Allen Ginsberg to Bob Dylan and Bob Dylan to the Beatles gives only a hint of what experience the reader can expect from this purely unpredictable pop innovation of a book.  You learn the lie which entertainer Bobby Darin inherited as his short, strange and spectacular life.  You get acquainted with the White House ghost that's been killing our presidents, with Ronald Reagan as the next target.  You're let into the bedroom on the tight the millionairess publisher of The New York Post smoked her first joint.  You go to dinner at Jerry Garcia's house to bear him tell about growing up in and around San Francisco, a future star, except for one minor detail. You rub shoulders with Averill Harriman, Elizabeth Taylor, Secretary of State Vance, Midge Costanza and Edmund Muskie while Jimmy Carter breaks you up doing a standup routine as the opening act to Frank Sinatra.  When you're brought along as the author invites Mick Jagger to meet Miles Davis, the trip turns out to be the author's personal history of the Rock Revolution of the '60s.

If you still don't remember the role Aronowitz played in that halcyon decade, here's more:

A man who used to be called a legend in his own time. . .he was the first reporter to write about the Beat Generation as a literary movement rather than a bunch of switch-blade crazies... Pete Hamill once credited Al as the man who taught him how to write.  John Lennon once credited Al as the man who turned him on to marijuana.  Bob Dylan once joked that Al was the only man who could save the world ... Al was one of the influences who pressed Dylan to go electric, who encouraged Carole King to sing her own songs, who talked Miles Davis into playing the Fillmore, who gave Dolly Parton her New York debut, who discovered Lou Reed and the Velvet Underground and put them together with Nico....

The litany of names rolls on like the words on a teleprompter.  This, surely, is not---despite the glitter---the treasure that is to be found in The Blacklisted Masterpieces of Al Aronowitz.

It is not.  The gold here is in the writing itself.  Aronowitz has a place in the history of modern journalism alongside such lights as Jimmy Cannon, Red Smith, Murray Kempton, Jimmy Breslin and Pete Hamill.  His ability with words put him there---and his reporter's instinct for what is happening, what's current and hot and needs telling. Look, for instance, at the piece he has chosen to lead off this assemblage "Stonewalling It Through The Eighties, or, The Killer Wasps." It's an essay full of outrage and vision and hard truths that should be printed in boldface type on the front page of every newspaper in America:

There's no creature slimier than man when it comes to outwitting himself. Because he rather lose his life than his ego, he uses his most creative energy to design his own destruction.

These are the words of a man who has translated personal bitterness into nourishment for the rest of us---sourdough bread for those readers who still have strong teeth.  The book needs more of it.

The elements that make up most of this book may be attractive to you if you're the kind of person who is interested in what Mick Jagger's really like.  I don't care, and what's more, I don't believe that Aronowitz really cares.  He is after all, no Lillian Ross or John McPhee drawing for us the total picture of a celebrity or an event, but rather a man who spent his career writing daily columns about current public favorites for a big publication.

From what he says, he got shit upon by The New York Post, but he does not convince me---with all his powers as a persuasive writer, and they are considerable---to give a damn.  Every writer gets treated unjustly by fate---and so do janitors and auto workers.  Life robs us all.  Better for a good journalist to write stingingly, as in "The Killer Wasps," than to obsessively kick against the pricks.  ##