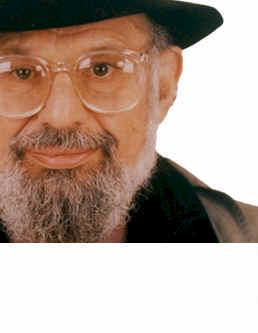 Ooooowwwwwhoooo!  Went Allen Ginsberg upon entry into the world on the day of his birth June 3rd, 1926, and he continued to HOWL right up until his death on April 5, 1997.   Born in Newark, NJ, the son of Louis Ginsberg, a high school teacher and poet, and his mother Naomi, who later was to be institutionalized in a mental hospital, Ginsberg possessed from the start a dazzling persona destined for unavoidable fame and greatness.

In the direct lineage of the American tradition of poetry, beginning with Whitman and continuing up to William Carlos Williams, Ginsberg is the natural culmination of that free flowing and spirited America, both filled with joy and defiantly unapologetic, that characterizes a style both hallucinatory and filled with living ecstasies.  He is the American poet, to say the least.  He is lyric and all the time singing.  He is a prophet of rage.  He is comic and saddened.  He is a holy voice filled with obscenity and mysticism.  His is a voice filled with pacifism, peace and a litany of war.  He is barbaric and gentle.  Allen Ginsberg is so many things… and more.

After attending Columbia University, it was here for the first time that Ginsberg met Jack Kerouac, William Burroughs and Neal Cassady (among many other noted writers and poets).  Kerouac, who was later to coin the term “beat generation”, which he first heard used by Herbert Huncke, was somewhat of a reluctant spokesman for the generation.  But nevertheless, it was Ginsberg who took up the reigns of becoming spokesman, while helping to bring recognition to the writers and movement that changed the social consciousness in America for years to come.  HOWL, which was published in 1956 by Lawrence Ferlinghetti, is Ginsberg’s famous litany that helped escalate him into the spotlight after it was banned and both him and Ferlinghetti found themselves dragged into court on obscenity charges.  Allen Ginsberg has achieved the kind of success that few poets are able to do.  He has been read and translated in a multitude of languages all across the globe.  And because there are so many people out there whom Ginsberg has affected, the AllenGinsberg.org website is a living homage to his greatness.

A few years prior to his death, Allen Ginsberg established the Allen Ginsberg Trust, which as one of its originating plans was to establish a website.   The website is intended to offer a comprehensive glance at Allen and his work, in addition as a way of offering future projects such as further publications, photography, correspondences and a documentary detailing Ginsberg’s most famous work – Howl.  The result is a very professional and beautiful tribute to the legacy of Allen Ginsberg.  The website begins with an animated caricature of Allen as his recorded voice is heard reading his poem, America. Other features include a brief biography, timeline, and macromedia flash player capabilities, as well as an extensive library.  The library is a growing archive intended for research or general perusal of vast materials from video clips of interviews, artwork, photographs, audio interviews and readings, texts, handwritten drafts and manuscripts, posters, fliers and much more.  Everything is detailed and documented for easy exegesis.  Click below to get started.